The future was one of the stars at Reworks Agora 2019, the forum of the annual Reworks Music Festival. The Dukakis Center contributed to the forum by inviting featured speaker Epaminondas Christofilopoulos, UNESCO Chairholder in Futures Research, a member of the World Future Society (WFS), Vice-Chair of the Foresight Europe Network (FEN) and Co-Chair of the Greek Node of the Millennium Project, a Washington, DC-based Think Tank coordinating futures research and foresight studies. 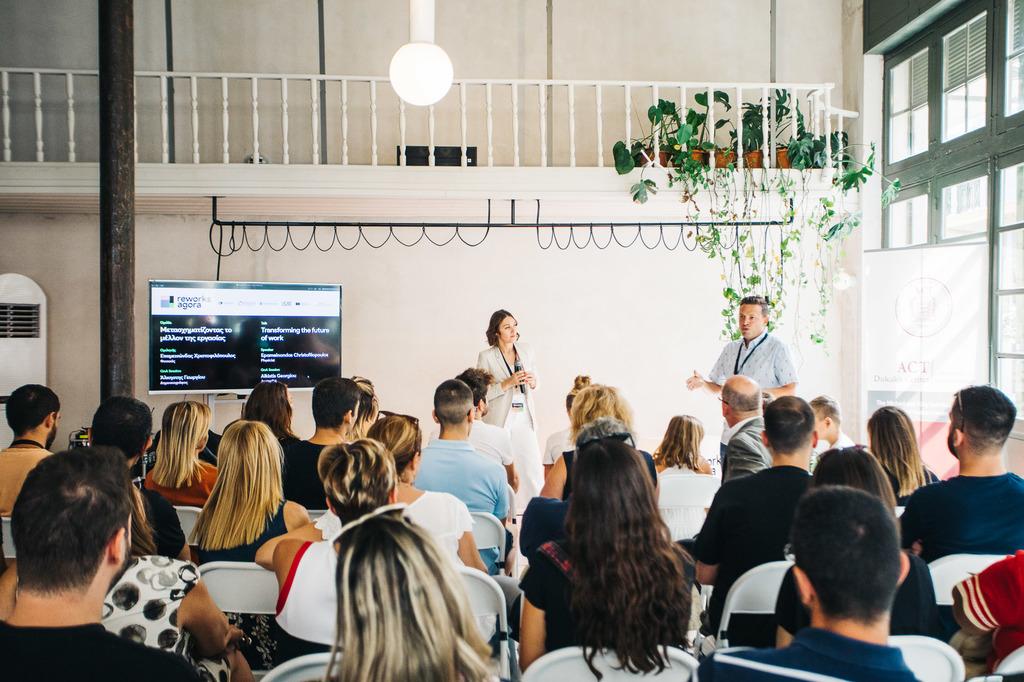 The event took place on Sunday, September 15, at Ypsilon, where a diverse standing room only audience was by turns enthralled and puzzled by the alternative futures or technology and work. Dr. Christofilopoulos presented the recently published research findings of the Millennium Project, which focused on technological developments and projected three scenarios for the future of work and technology in 2050, acknowledging that the complexity and the interactions of the factors may not offer definite answers or safe predictions. 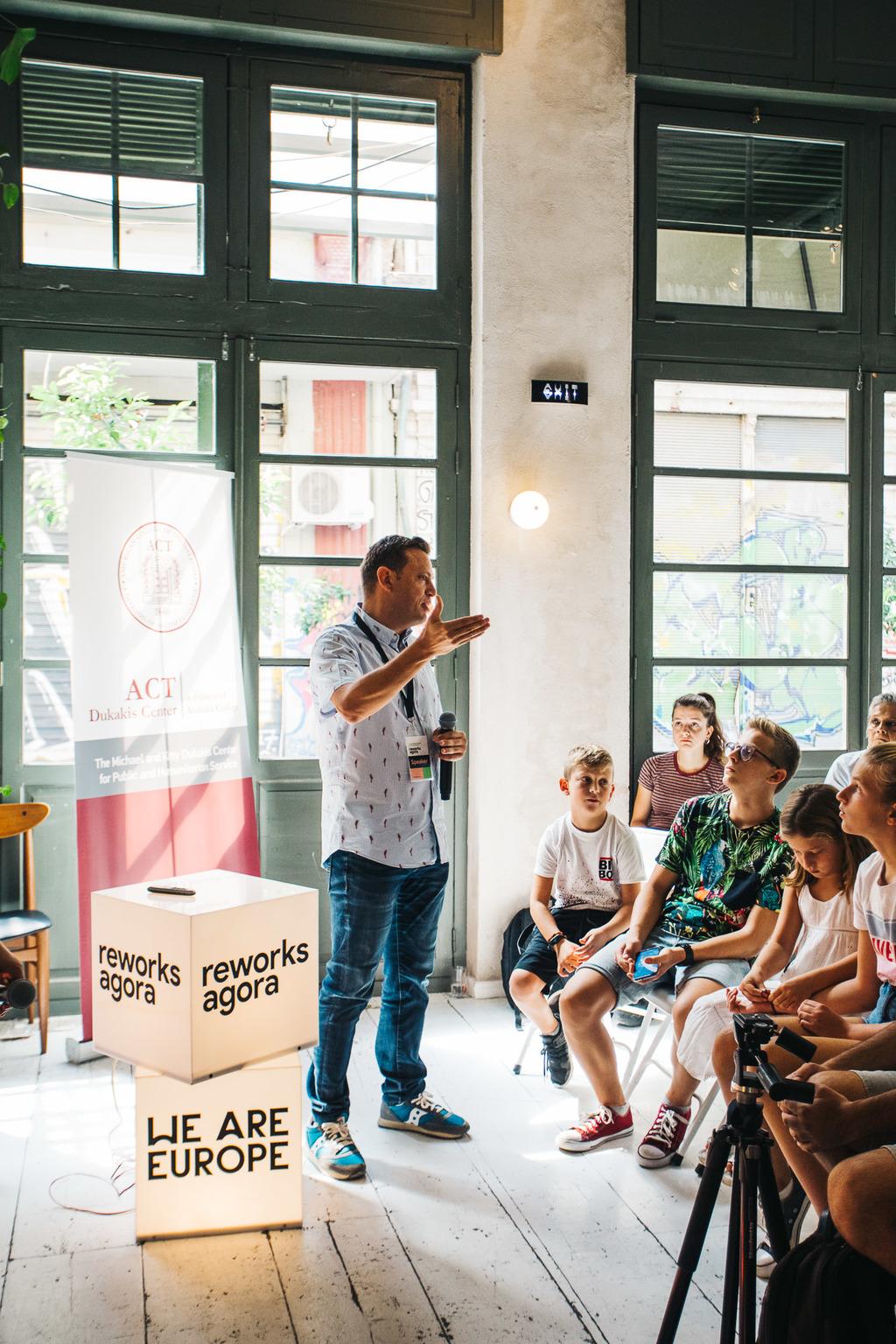 According to a first neutral scenario, the technological transformation and developments in AI will create more jobs, and although certain disparities may decrease, the transition will not be smooth due to a lack of appropriate policies. More than 50% of workers will be self-employed freelancers, which will result necessarily in the reform of occupational pension schemes.
According to the second, frankly, dystopian scenario, social, ethnic, religious and ideological polarization will be increased, as disparities, fear, and isolation become the norm. Private companies will have their own armies, standing in for public authorities in the sector of internal and national security, while thousands of people will immigrate in search of work.
Finally, a third, optimistic scenario foresees that political institutions and governments will have provided that AI serves the public interest and the prosperity of human beings. Humanity will be free from automated tasks and will be able to focus on creativity, enjoy free time and economic security, and redefine their role in society.
It was precisely this last point which David Wisner, Director of the Dukakis Center, highlighted in a subsequent exchange with Dr. Christofilopoulos. Asked in what way his projections could be labeled a public service for the benefit of society, Dr. Christofilopoulos intimated that this effort to reimagine social life could be the ultimate public service gesture. This was the third consecutive year the Dukakis Center co-hosted a session at Reworks Agora. The Center has previously co-hosted sessions on vTaiwan and the Sunflower Movement, and on blockchain and participatory democracy worldwide.
Thessaloniki-based journalist and content strategist Alkistis Georgiou moderated the session. 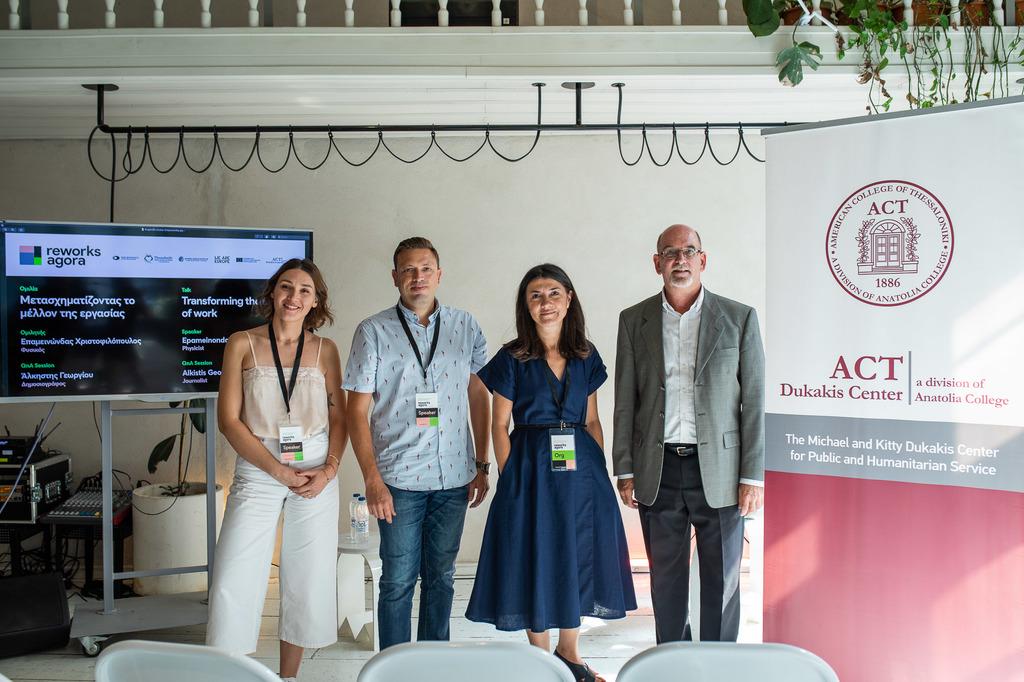