The two-day event featured seven distinguished ACT alumni who are working currently in civil society or the public sector. They were joined by keynote speakers Beth Noveck of Northeastern University, Efi Stefopoulou of the Hellenic Ministry of Public Administration and e-Government, and Polly Mackenzie of Demos, a London-based cross-party think tank.

The event had a two-fold focus. On day one, three panels discussed the skills and training the public sector and civil society professionals will require in the twenty-first century. The point of departure for the discussion was an article on skills and training in the federal workforce published in the journal Democracy by Professor Noveck, who also serves as the Director of GovLab and is the Chief Innovation Officer for the State of New Jersey.

Day two was dubbed as a Mini Summit for Democracy, conceived as a local and regional follow-up to the Global Summit for Democracy hosted in December 2021 by US President Joe Biden. The keynote session featured Polly Mackenzie, who had served as a senior aide to Nick Clegg, former leader of the Liberal Democrats in the United Kingdom, and ACT alumna Ilda Zhulali (Class of 2001), currently Advisor on European Integration to the President of the Republic of Albania. 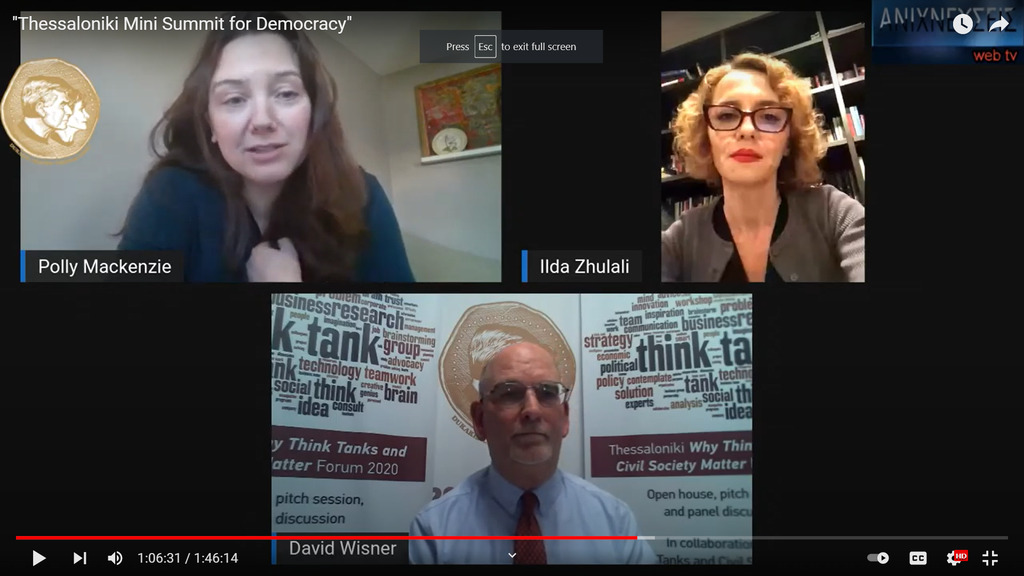 The Forum was dedicated to the memory of the late Dr. James McGann, the founder and director of the Think Tanks and Civil Societies Program at the University of Pennsylvania. Dr. McGann spoke at the first forum, in Athens, in May 2019. Two subsequent forums, in 2020 and 2021, were organized to coincide with Dr. McGann’s annual global think tank summit. Dr. McGann passed away suddenly, without warning, in December 2021.

Supplementing day 2 of the Forum was the premiere on YouTube of Dr. McGann’s 2019 lecture.

To coincide with the Forum the Dukakis Center also opened a virtual exhibition of posters and banners for Dukakis Center events in 2011-2021. The exhibition, designed by current ACT senior Arsa Sota, is entitled “Banner Days” and can be found on the Artsteps platform.

The forum and the mini summit were both webcast on the Anixneusis Web TV channel to a pan-Hellenic audience. Video from the sessions is available here and here.