Orville Schell, Arthur Ross Director of the Center on U.S.-China Relations at Asia Society, is one of those rare public figures who can shift seamlessly from the esoteric to the essential, from the fictional to the factual, from philosophy to policy. This trait was in abundance on Wednesday, March 10, 2021, when Mr. Schell spoke to an overflow audience live from his office in New York via Zoom webinar. The occasion was the European launch of Mr. Schell’s latest book, his eleventh, a novel based on his experience growing up as a boy in the China of Mao Tse-tung. Co-hosting with the Dukakis Center was the Manchester China Institute, in the person of the Institute’s founding Director, Peter Gries.

Spectators logging in from Seoul to Seattle were treated to an exclusive appearance in Greece by one of the leading experts on China in the United States today. The discussion ranged from Aristotle to Lenin, from the “century of humiliation” to “rejuvenation” and global dominance. The major theme of the discussion emerged early on as Mr. Gries, Professor of Chinese Politics, University of Manchester, and Lee Kai Hung Chair and Director, Manchester China Institute, masterfully engaged in an extended discussion on Mr. Schell’s novel, his experience in China, his views on Chinese leadership from Mao to Xi Jinping, and his predictions for the outcome of east-west rivalry in the 21st century.

Is mutual understanding possible between China and the West? Do outsiders need to be more empathetic in their interactions with their Chinese counterparts? Can either side be considered open-minded by the other?

A revealing moment came when Mr. Schell was asked by session moderator David Wisner, Executive Director of the Dukakis Center, where Greece and Europe stood in this equation. Fittingly for an audience in Thessaloniki, Mr. Schell quoted Aristotle on the meaning of life, in terms clearly alien to the conceptions of Chairman Mao and the Chinese Communist Party. When queried how, in practical terms, one should approach talking with the Chinese, be it formally through diplomatic channels or informally via the cultural or commercial exchange, Mr. Schell concurred with the views of former Massachusetts Governor Michael Dukakis, the namesake of the Dukakis Center, that Americans and Europeans needed to be prepared to talk and listen, but from a position of multilateral strength and reinforcement.

The specter of a second cold war between China and the United States was present throughout, and Mr. Schell did not attempt to dispel the pessimism of certain auditors in the Q/A session. Asked what he had to say to young people wanting to learn more about China and Chinese society, he counseled patience and endeavor. Do not worry if you are confused, most of us are, was his message.

The webinar marked the launch of an informal institutional partnership between the Dukakis Center and the Manchester China Institute, based at the University of Manchester. Dr. Wisner also announced a new internship program at the Dukakis Center for select high school seniors at Anatolia College who are keen to study how China is portrayed in Greek and European media. Dr. Wisner plans meanwhile to organize additional online events in the near future in the ChinaWatch webinar series. 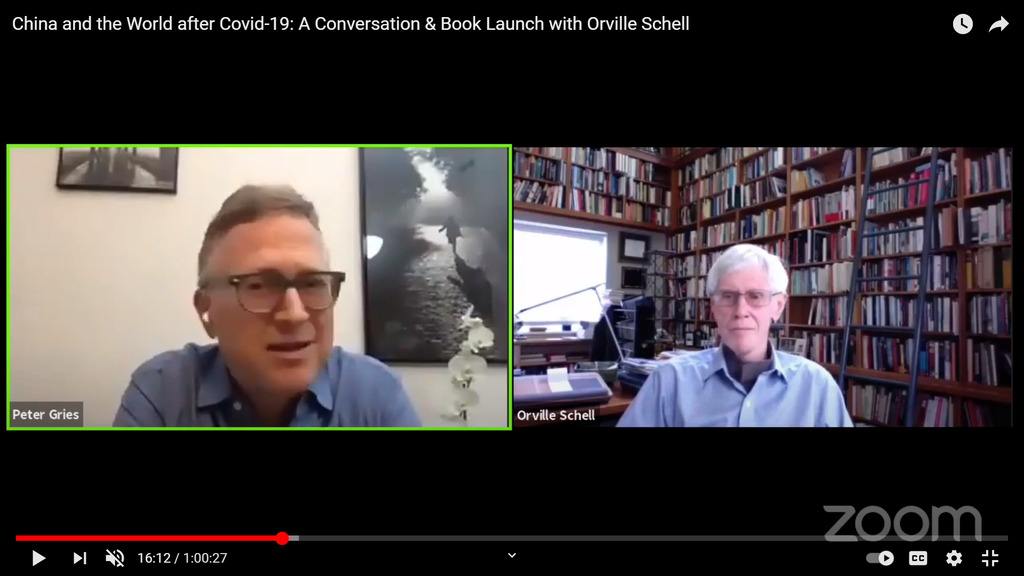 Orville Schell is the Arthur Ross Director of the Center on U.S.-China Relations at Asia Society in New York. He is the author of ten books about China and a contributor to numerous edited volumes. He has written widely for many leading magazines and newspapers. Schell is a Fellow at the Weatherhead East Asian Institute at Columbia University, a Senior Fellow at the Annenberg School of Communications at USC, and a member of the Council on Foreign Relations. He is a former professor and Dean at the University of California, Berkeley Graduate School of Journalism.

Peter Hays Gries is the Lee Kai Hung Chair and founding Director of the Manchester China Institute at the University of Manchester, where he is also a Professor of Chinese politics. He was previously founding director of the Institute for US-China Issues at the University of Oklahoma. He studies the causes and consequences of how Chinese feel and think about the world—and how the world feels and thinks about China and is particularly interested in the dynamics of mis/perception and mis/trust.