Dukakis Center Director David Wisner imagines the day when the leaders of all the countries in Southeast Europe would be graduates of the American College of Thessaloniki. A new wave of ACT alumni took small but meaningful steps in that direction during the local Greek elections of May 2019.
Since its inception in 1999, the Dukakis Center has taken the lead in helping ACT students to develop their civic awareness. True to form, on Friday, November 8, the Center celebrated the exploits of five ACT alumni who became involved in the 2019 local elections. 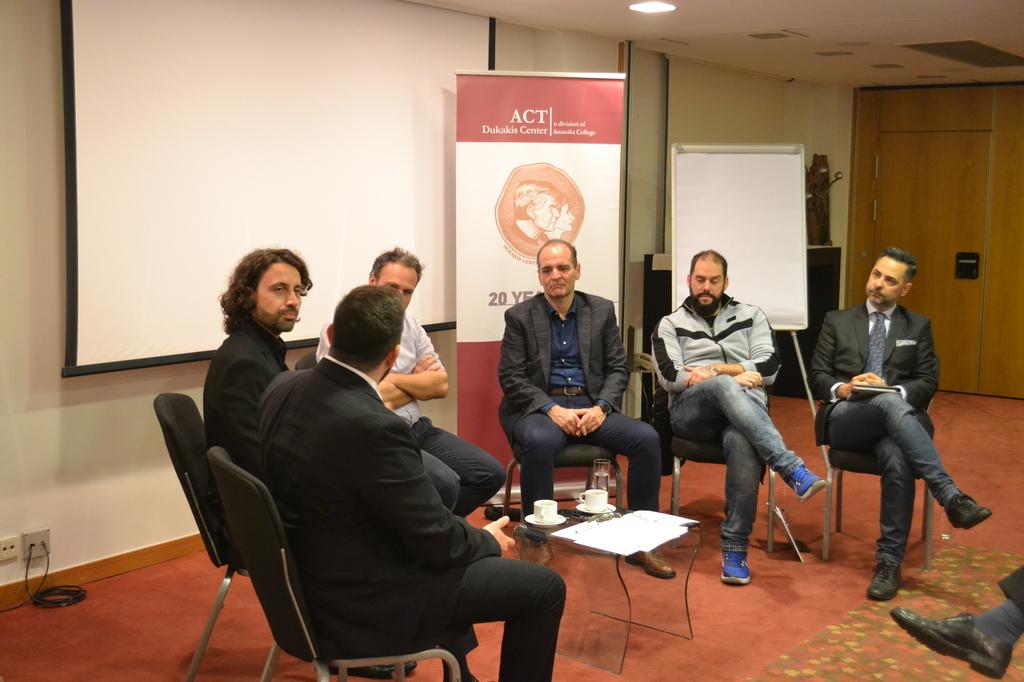 Joining moderator Dimitri Diamanti, ACT’s Business Liaison, Career Services & Alumni Relations Officer, were Fanis Kontoulis (Class of 1998), Sofoklis Kaltsios (‘01), Keimis Krionas (‘99), Haris Lalatsis (2005, ACT MBA 2008), and Alexandros Raptis (MBA, Class of 2019).
The discussion ranged from the routines of candidates who ran for municipal council seats in Thessaloniki and the suburbs, to the role of marketing research in support of candidates and parties. The role of social media and electronic marketing-generated considerable interest among those present in the audience, mostly a mix of ACT students, alumni, and faculty. During the second hour, Thessaloniki Mayor Konstantinos Zervas made a surprise cameo appearance, joining the panel for an extended discussion on campaigning and electioneering.

This was the latest in an ongoing series of Dukakis Center events highlighting the contributions of our youthful protégés in local, national, and European electoral politics. In 2014 the Center hosted a round table of local and Athens-based journalists, moderated by Giorgos Toulas, for a discussion that focused on the high incidence of first-time candidates in local elections. Later that year the Center organized an exhibition of photographs of candidates for local and European elections; one of the candidates featured was none other than Konstantinos Zervas.
Then, in 2018 and again in 2019 the Dukakis Center hosted mock democratic conventions on the future of Europe for the benefit of local high school and university students.
The Dukakis Center has also facilitated students observing US elections. In 2012 a team of American and Greek interns live-blogged the reelection campaign of President Obama, culminating in an all-night vigil on Election Day. In May 2016 the Center hosted a discussion with two Democratic delegates, during which the student participants conducted a poll on the major issues in the campaign. This was followed by an Election Day gala at the Hyatt Regency Hotel.
The core mission of the Dukakis Center is to inspire young people to become involved in public affairs. ACT can rightfully take pride in the accomplishments of its alumni, who are well equipped to contribute to their community regardless of major. Fanis Kontoulis, who campaigned for Mayor Zervas, captured this spirit perfectly in a social media post.